Dirty dishes have a negative effect on the coworking space for all members. The vast majority of members clean their own dishes and are annoyed by those few who don’t. It’s usually just glasses and mugs and spoons: easy things to clean. Given most coworking spaces’ strong commitment to the value of community it might seem that getting members to consistently pitch in and clean their dishes would be one of the easier challenges in running a coworking space.

Not so. Dirty dishes persist. And it’s not just the case for Locus Workspace: it seems to be an acknowledged problem for coworking spaces generally, including those well-known for their strong sense of community. Nonetheless, perhaps for the reasons just noted, it is not without some sense of… embarrassment? fear? impropriety?… that coworking spaces admit the problem. And now it’s Locus’s turn to air it’s dirty laundry dishes. Or at least to talk about some of the things we’ve done to try to end our tragedy of the commons (unfortunately without the greatest record of success).

We started from day one with the “Locus Rules“. Every person who joins Locus has to read the rules and click a box indicating that they read them. The rules are short, and cleaning up after yourself, including doing your dishes, is one of the few things members commit to (just in case they thought they were renting a serviced office rather than joining a coworking space). That worked for the most part when we were a very small coworking space, probably because members are more inclined to clean up after themselves than not, regardless of the rules.

But over time as the space grew, more and more dishes seemed to pile up in and around the sink. We joked about different things that might put a stop to it. We could just put a picture of a person looking at us above the sink. That seems to work! Better yet, make the onlooker in the image of Jesus (can you tell that one of my other hats is as a moral psychologist?).

How about surveillance cameras! But Locus (or to be fair, just I) had already been the butt of some members’ parody of the “Locus Rules,” turning it from a “Community Workspace” into a “Communist Workspace”. 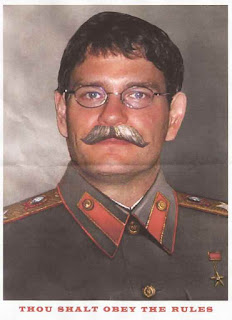 Maybe surveillance cameras aren’t the key to building a strong community?
Instead we went for increasing the number of days the cleaning person comes and just reminding members periodically to clean their dishes and not be jerks. The problem persisted, but until recently seemed to stay pretty stable without getting too out of hand.

But over the months and even years the dish problem has occasionally reared its ugly head. Inspired more recently by a blog post from another coworking space owner who seems to have done wonders at building a strong sense of community (hats of to Angel K., founder of Cohere in Fort Collins, Colorado), we tried blatant plagiarism.

An image from Angel’s blog post, “the most effective message to date”: 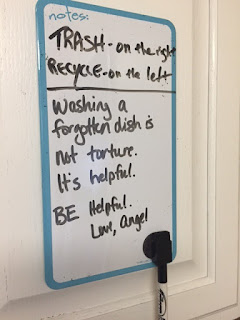 “If it ain’t broke, don’t fix it,” right? Anyway, here was our version: 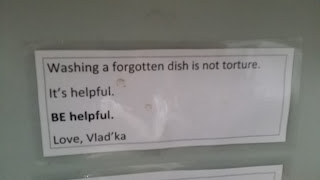 There are a lot of reasons I’m not crazy about this note. First, I’m not a big fan of plagiarism (neither is the community manager who put it up at my suggestion), despite the fact that in this context it doesn’t seem like a big deal, the original version was posted as a recommendation about what works to other coworking spaces managers, and adding a citation in this context would presumably undermine the message.
Second, it’s not the kind of language Czechs would use lightly, and Vlaďka is Czech (I remember signing a letter to a Czech back in the day when people wrote letters, “Love, Will” and being told–uncomfortably–that she didn’t know I felt that way about her). I guess Czechs have since become more familiar with English peculiarities, but the experience has stuck with me.
Third, it just doesn’t communicate how many of us feel about the dirty dishes in and around the sink. “Don’t be a jerk,” or, “We’re not your maids!” better sums it up. But I generally feel extremely lucky to have the group of members we have at Locus, so an angry sounding note that only applies to a small fraction of the members doesn’t strike the right tone either. But the “Cohere” message still felt to me like it didn’t have an authentic Locus tone.
So I was somewhat happy to see another community manager make light of the first message: 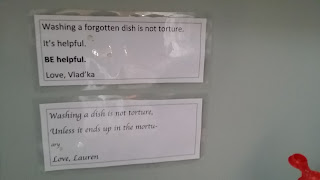 In case you can’t read it, here’s what it says:

“Washing a dish is not torture /

Unless it ends up in the mortu- /
ary.”
Still, while I like keeping things on the humorous side, the more words we use, the less likely people are to read them, and the more fun we poke, the less likely people are to take the whole thing seriously. Unsure what to do, however, I succumbed to a classic case of decision paralysis and did nothing at all.
Still, the dish problem has not improved.
Happily, I’m lucky to have another incredible community manager who has a knack for saying things directly and without pulling punches, without it being offensive. So here’s the newest version of the “do your dishes” wall of fame: 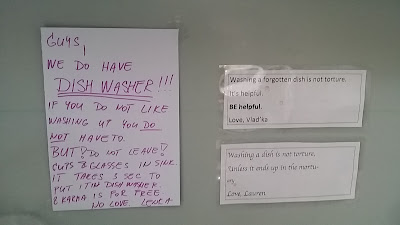 In case you can’t read it, here’s what it says:
“GUYS,
WE DO HAVE
DISH WASHER!!!
IF YOU DO NOT LIKE
WASHING UP YOU DO
NOT HAVE TO.
BUT! DO NOT LEAVE!
CUPS & GLASSES IN SINK.
IT TAKES 3 SEC TO
PUT IT IN DISHWASHER
& KARMA IS FOR FREE.
NO LOVE, LENKA”
Now there’s a message I can get behind. And behind that “No Love” don’t you just feel the love?!
Now what do we do about the kitchen without a dishwasher?
We use cookies on our website to give you the most relevant experience by remembering your preferences and repeat visits. By clicking "Accept", you consent to the use of ALL the cookies.
Cookie settingsACCEPT
Manage consent