I recently got back to Prague and Locus Workspace after more than 2 weeks in Santa Monica, California. We didn’t get in until about 22:00 and the time difference is 9 hours. I couldn’t sleep. Finally gave up trying and went to Locus at about 7am, Wednesday morning. There was what appeared to be police tape on the entrance to the space, with the sign, ZÁKAZ VSTUPU (DO NOT ENTER). 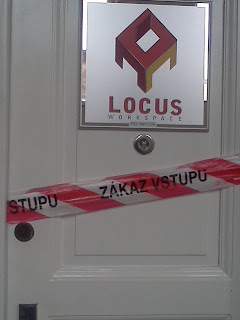 I went in anyway, with my heart pounding a little with fear about what I might find. Nothing looked weird until I got to my desk. 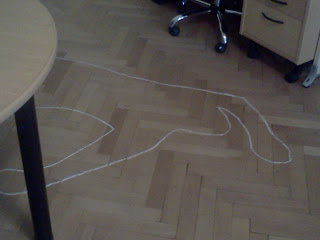 There was police chalk outlining a body on the floor. My mind started racing.
There was a sheet of paper on my desk from the police. 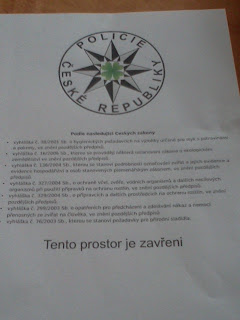 The last line in big letters says, “This property is closed.”
Huge adrenalin rush as my mind started racing. Can this be real? Wouldn’t someone have called me!? Did it just happen? Should I call the police and ask? Should I call my wife and get a clear headed opinion? Shouldn’t I get the h*ll out of here? Am I going to have to close the business? Was someone killed? Who? (Yes, it’s a little disturbing that concern about who might have been killed didn’t occur to me until all the petty self-interested thoughts had worn themselves out.)
I decided to read the small print on the paper. Each line was a different legal code violation.
The first violation was for keeping farm animals on the premises and the second for food violations. Okay, this cannot be real. Wouldn’t someone being killed top the list. But what if it is real!! A four leaf clover cannot be part of the Czech Police logo, can it (we’re not in Ireland after all)?
I decided the reasons listed for closing the space were absurd enough (farm animals!?) that I would at least be justified in ignoring it all and getting to work even if someone was murdered there. So I cleaned up the chalk and turned on my computer, adrenalin still rushing and heart still pounding, until about 1/2 hour later when there was a key in the door. It’s too early for members. Are the police here?
A Locus member! And no hesitation going right to a desk. “You just walked right in?”
“Sure, why not.”
“The police tape on the front door!?”
“I don’t know anything about it.” Smile.
Finally, I could relax. Clearly a prank on Will.
A little bit later and another member came in and showed me the “bloody” steak knife I hadn’t discovered under the desk next to the body. 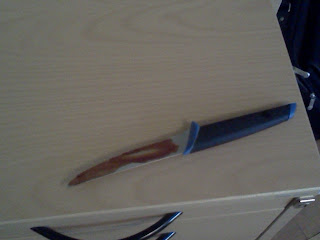 More than two weeks away with the members managing the workspace themselves, no calamities, no calls with complaints, and energy left over to put in some hard work to “welcome” me home!
You have to love coworking!
Thanks, Locus Workspace Members, for the warmest welcome I’ve had in a long time (and I mean that)!
PS: The “police tape” was basic construction tape, the “bloody” knife was covered with dried ketchup, the Czech Police logo really does look like that, and the “police chalk” was your basic sidewalk chalk and cleaned right up.

2 thoughts on “Death at Locus Workspace, or Coworking is Awesome”